Wolfgang Gliese can't say exactly how many thousands of kilometers have been covered over the years. A whole lot in any case. Between 1986 and 2016 he hiked again and again – first with his wife and daughter, later also alone and above all often with his friend Harald Wuttke. Crisscross through Germany and Europe.

What he is particularly proud of is that, over the years, he has walked continuously from Roskilde in Denmark to Europe's southernmost mainland point, Tarifa in Spain. According to him, it was more than 4000 kilometers from his front door to Tarifa alone. The whole thing was never planned. "It just worked out that way," says Gliese. "I never thought it would take on such proportions."He used to hike here and there in the Harz mountains, or on vacation in Austria. Always just day hikes. "The long-distance hiking came first."

From Flensburg to the Wachau

The wanderlust began with a section on the European long-distance hiking trail E6: from Flensburg to the Wachau in Austria. "By the way, it also leads through Riddagshausen," says Gliese. The German section alone, from Flensburg to the Dreisesselberg in the Bavarian Forest, covers around 1500 kilometers. Next up was a trip from Flensburg north to Roskilde in Denmark and also from Hamburg south to Lake Constance – the latter route covering around 1000 kilometers.

Wolfgang Gliese and his companions walked the routes in stages. "Always a week to ten days, around 200 kilometers a week, about 30 kilometers a day," he says. "After that, it was time for a relaxing vacation, and then it was back to work the next year." 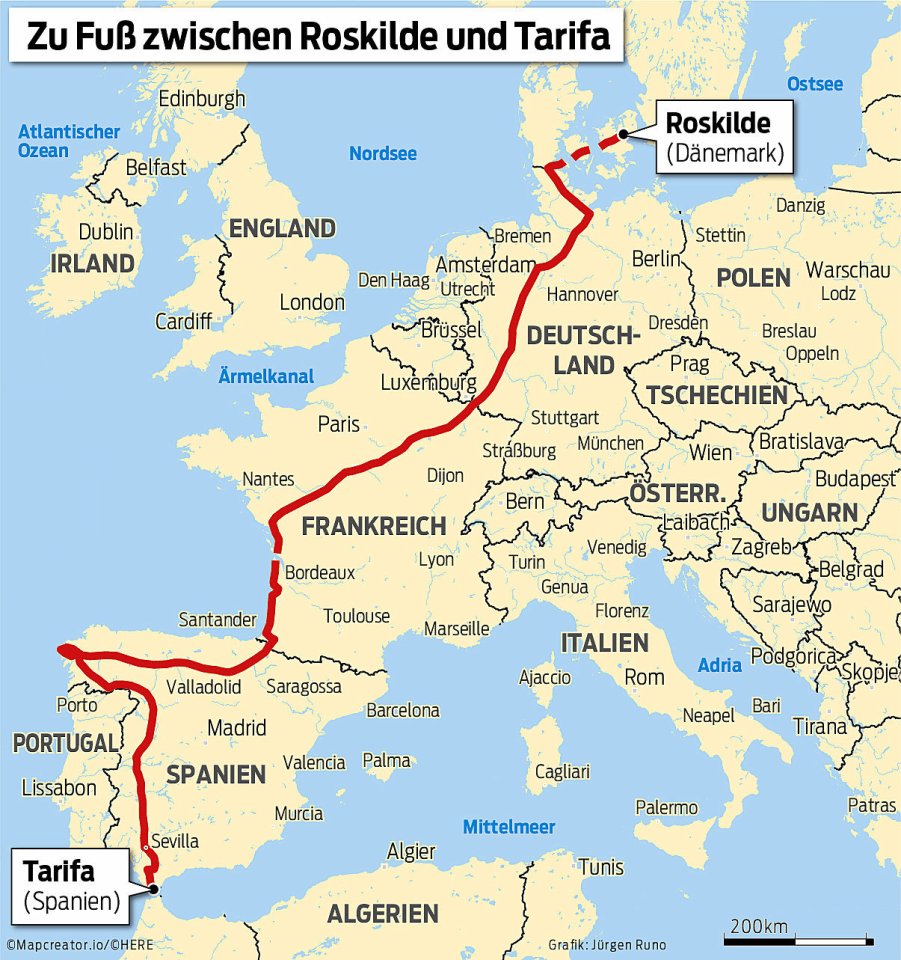 And he remembers that the search for accommodation was initially much more complex than it is today: "In those days, there was only mail and telephone. In those days, people went to the main post office to get addresses for accommodations. There, telephone directories of the entire Federal Republic of Germany hung on a meter-long shelf like hanging files, and one then looked through the corresponding telephone directories. Quite laborious!"

Always walked on exactly where the last time had ended

Over the years he has seen so incredibly much of Germany. "We have always continued to run exactly where we left off." He also traveled from Bad Bentheim on the Dutch border to the Polish border near Cottbus – once across from west to east, and then further south to the Zittau Mountains and then west again via Hof to the Rennsteig in Thuringia.

From 2002 to 2007 he also went to France, along the coast of Brittany. "There I was on the road with the tent, you can always find campsites there," he says. Yes, and then Hape Kerkeling's book "Ich bin dann mal weg" ("I'll be off then") with experiences from the Way of St. James was published. "My friend Harald and I thought: We can do that too."

"I thought: once and never again"

They started in 2008 in the French Saint-Jean-Pied-de-Port in the Pyrenees, right on the border with Spain. "It was just raining, it was terrible," recalls Gliese. But they made it to Santiago de Compostela and Cape Finisterre within a month. "I thought: once and never again. The path was very crowded. But the next year Harald said, we should go again." This time they walked from Seville in southern Spain to Santiago de Compostela. "It was fierce, 40 degrees in the shade – and there wasn't any shade."

The Way of St. James from Seville to Santiago is called Via de la Plata. "This road is ancient, and then the Romans developed it," Gliese says. "The roads and bridges are still largely intact. When I see something like this, the problems of our Brunswick bridges come to mind."

He studied Spanish and French at the adult education center

What impressed him there and in all the other places: "You meet a lot of interesting people, most of them are really great," says Gliese. In the years that followed, he walked many more kilometers through France and thus made the connection between Germany and Spain. He also completed the stage between Seville and Tarifa in southern Spain. Wolfgang Gliese even learned Spanish and French at the adult education center to be able to communicate well on the road. "Unfortunately, you forget that so quickly as you get older," he says.

What he doesn't forget are the many beautiful moments of the countless hikes – and also the hardships. In France, he once ran against the clock to get a place to stay. "That's when I broke my foot. The biggest pain I ever had! It took half a year to get it back together again."He emphasizes: "You have to be careful not to overexert yourself. And what is also very important: You must always buy the shoes a little larger than normal, so that you have enough space."

1000 steps through the skyscraper

In a few days Wolfgang Gliese turns 82. He no longer goes hiking because he takes care of his wife around the clock. No easy task. "But I'm not alone – there are almost three million people in need of care who are cared for at home. Everything happens in the quiet chamber." When Corona is over, he wants to get support from Caritas again, as before the pandemic. Besides, his daughter comes every week, and then he always has a little free time.

"Then I can walk," says Gliese. He lives in the I-Punkt in Heidberg. "From the bottom of the cellar to the top are 301 steps. So if I go three times, that's about 900 steps, and again from the basement to the fifth floor are 100 – then I make the 1000 full. One up, one down takes ten minutes! Thank God I can still do all that. No cartilage hurts me."